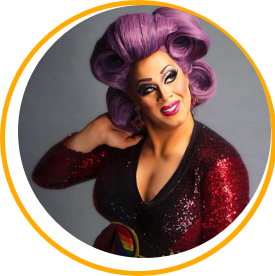 Andrew Levitt, grew up in a small northeast Ohio town, before attending college at Denison University where he went against all advice and graduated with a B.F.A. in Theatre Performance in 2001. Shortly thereafter, Andrew created the character of Nina West, a caring, intelligent, theatrical, funny, goofy, slightly nerdy drag queen, and developed her to the point where he won the title of National Entertainer of the Year in 2008. Nina has been captivating audiences nationwide ever since!

Andrew chose to leverage his success for the good of his community, innovating to raise money for many charities, the most recent of which are: Besa, Kaleidoscope Youth Center, Family Pride Network, Planned Parenthood and Gateway Film Center.

Recently, he decided to go all in and leave his steady desk job to work on developing Nina and other projects on a full time basis. Listen to hear some of the items in the pipeline.

2:05 Andrew’s first rock concert… not what you think!

4:35 Andrew remembers thinking, “My parents will kill me if I do this!” So he did it.

7:30 What was Andrew’s first success?

28:05 The moment Andrew realized he wanted to be and COULD be a vehicle for change.

37:43 That was professionally one of the best things I’ve ever done! Buyer and Cellar

48:47 Hey Disney, we’ve got your next Princess!  #PrincessNina

For tickets to The Wonderful World of Nina go to https://www.eventbrite.com

Ketel One vodka and Ginger Ale